Archaic Laws Have No Place In Democratic Malawi 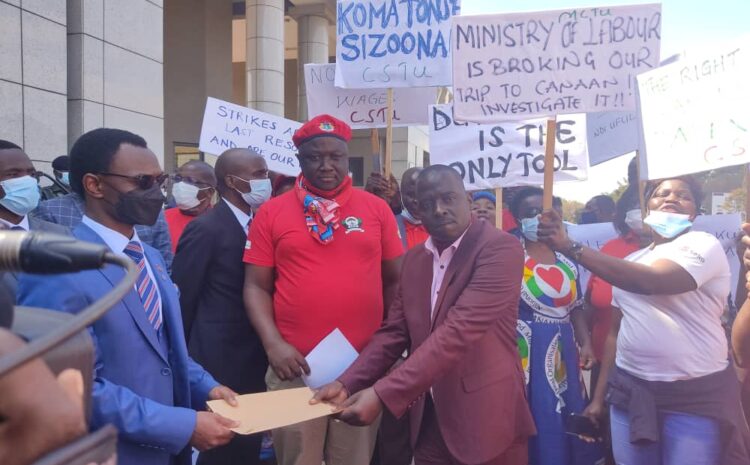 In solidarity with the Malawi Congress of Trade Union (MCTU), today the Centre for Democracy and Economic Development Initiatives -CDEDI joined all workers in Malawi at the National Assembly to deliver the petition against the undemocratic bill which seeks to stifle the rights of Workers. The bill seeks to empower the employer to deduct pay on employees on strike.
MCTU demands suspension of the Labour Relations Act amendment process, Immediately call for a Tripartite Labour Advisory Council meeting, Respect annd promote the principle of social dialogue and tripartite consultation and, should not frustrate workers in particular essential service workers by denying them their right to strike.
The petition was delivered by MCTU President, Mr. Charles Kumchenga and was received by Honorable Ben Malunga Phiri, member of Thyolo Central Constituency on behalf of the Speaker of the National Assembly. Phiri assured workers that besides delivering the petition to the Speaker, he will personally reject the bill.

Reacting after the petition was presented, CDEDI Executive Director, Mr. Sylvester Namiwa expressed shock that President Lazarus Chakwera would like to take away the rights of workers from exercising their labour rights. He describe this attempt as archaic, barbaric and unacceptable law which intends to slide back Malawi into one party era. He also noted that this ammendment is similar to Chakwera’s attempt to dismantle the judiciary.
CDEDI Executive Director has since reminded President Chakwera that Malawi is now a democratic state hence he has to allow citizens, and workers in particular to enjoy their labour rights. He emphasised that Malawi will never slide back to dictatorship of old Malawi Congress Party.
He has asked president Chakwera to fulfil his campaign promises on trimming presidential powers and empower the office of the vice president.
Mr. Namiwa therefore called on all Malawians remain vigilant and stand up against undemocratic traits of Tonse Alliance administration.
Read full petition below
__ 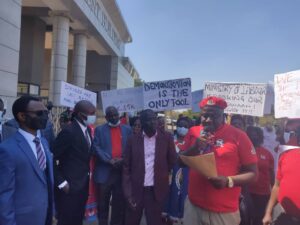 MALAWI CONGRESS OF TRADE UNION (MCTU) PETITION TO PARLIAMNET ON AMENDMENT OF THE LABOUR RELATION ACT
The Malawi Congress of Trade Unions is disappointed that Government proceeded to table the amendment of the Labour Relations Act despite MCTU call for suspension of the amendment process. MCTU would like to remind Government that it has violated the ILO Convetion 144 which it ratified. Government should also note that by ratifying this Convention it meant commitment towards tripartite consultation on all labour and employment matters. MCTU is surprised that government proceeded with the amendment process before it exhausted the consultation processes. Government should note that coming up with Labour Laws without proper consultation might ignites unnecessary tension between Government and Trade Unions hence destabilizing the economy.
MCTU is not happy with how government has handled this matter and we would like to register our frustration and fear that apart from undermining the International labour standards, we feel that our rights are being violated. The proposed amendments have serious implications on workers but of great concern includes:
• Allowing an employer to deduct wages from an employee who is on strike; this is a clear violation of fundamental workers’ rights. Therefore, we would like to remind Government that strikes or protests are last resort for employees. We therefore urge government to refrain from coming up with such oppressive laws but rather encourage effective social dialogue between employers and employees. In addition, MCTU would also like to remind government that essential service workers have the right to strike which government cannot take away. However, enforcing the right to collective bargaining and promoting effective dialogue is the only way to finding sustainable solution to workplace grievances rather than oppressing workers through proposing bills that deny workers to freely exercise their human rights including the right to strike. For that reason, MCTU do not support this amendment and urge Government to call for an urgent tripartite meeting for further consultation.
• Removing employers and employees as panelists of the Industrial Relations
Court (IRC); MCTU recall its proposal against the removal of employers and employees as panelists of the IRC but rather proposed further training or capacity building and increased budgetary allocation to allow smooth operation of the IRC. For that reason, MCTU distance itself from this amendment and also urge Government to call for an urgent tripartite meeting for further consultation.
MCTU therefore demand that Government;
1.  Suspend the Labor Relations Act amendment process
2.  Immediately call for a Tripartite Labour Advisory Council (TLAC) meeting
3.  Respect and promote the principle of social dialogue and tripartite consultation
4.  Should not frustrate workers in particular essential service workers by denying them their right to strike.
Government should not that if our demands are ignored we will not be quite but take appropriate action and pressurize government until this Bill is turned down.
Nothing for Us without Us
Charles Kumchenga
President
Madalitso Njolomole
Secretary General
7th July, 2021 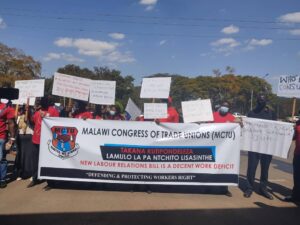 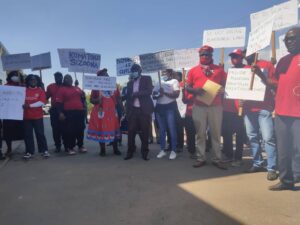