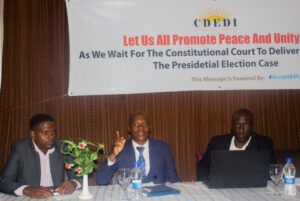 BRAVO MCP, CAN THE DPP AND UTM FOLLOW SUIT?

Finally the day Malawians have been waiting for is here! The Constitutional Court will deliver its ruling on the landmark presidential election case on Monday February 3, 2020.

As the day draws closer Center for Democracy and Economic Development Initiatives (CDEDI) is appealing to Malawians to maintain peace, law and order now, during and after the ruling. It is a fact that the ruling will favour one side. So, CDEDI would like to remind both sides that they should respect the ruling the way it will come. Those who will win should celebrate with humility and desist from acts that may provoke others.

As CDEDI we are convinced that our courts will deliver a just ruling based on the existing laws and available evidence. However, should the other side feel justice has not been done, they should be free to appeal by following proper channels without resorting to violence.

We would like to remind all politicians from both sides of the political divide to tame their tongues. Any carelessness in their language, has the potential of instigating violence.

Every Malawian should bear in mind that this is the only country that we have therefore we should not destroy it because of our political differences.

We appeal to the three major political party leaders namely; Malawi Congress Party (MCP) President Dr. Lazarus Chakwera, UTM President Dr. Saulosi Chilima and Democratic Progressive Party (DPP) leader Prof. Peter Mutharika to forgo their partisan interests and humble themselves and come together and address Malawians from a shared podium. Should this fail they should emulate an example set by the MCP President Dr. Chakwera who addressed the nation on various issues, including preparing the MCP supporters and all Malawians to accept the verdict of the Constitutional Court.

Our leaders should also be reminded that Malawians are following events surrounding the court case therefore they are better judges to decide who is a better leader among the three.

CDEDI therefore cautions Chakwera, Chilima and Mutharika to tread carefully prior during and after the court ruling.

CDEDI is also calling upon Traditional and religious leaders to take a leading role in preparing the masses to maintain peace and unity during this period.

While commending the media for the commendable job done so far by ensuring that the masses follow the court proceedings right from the start, CDEDI is urging them to maintain high ethical and professional standards in their reporting and programming and try at all cost to avoid sensationalism and overzealousness.

Every Malawian of goodwill has the duty and responsibility to preach peace and unity during this period.

CDEDI is once again calling upon the youth of this country to resist from being used to perpetrate violence by some greedy politicians. We want to remind the youth that their role should not be downgraded to that of being weapons for anarchy by their political masters.

CDEDI would like to appeal to the Chief Justice Andrew Nyirenda to ensure that both the Magistrate and lawyers that were involved in the midnight quashing of the warrant of arrest saga, are speedily disciplined by the Judicial Service Commission as directed by Justice Nyakaunda Kamanga.

The Anti- Corruption Bureau (ACB) Director Reyneck Matemba should effect an arrest of the rest of the suspects in the constitutional court judges’ bribery attempts before the ruling is delivered.

Acting Inspector General (IG) of the Malawi Police Service Duncan Mwapasa should ensure his charges avoid selective application of justice and desist from their usual colour sensitivity in carrying out their constitutional mandate of maintaining law and order.

The Malawi Communications Regulatory Authority (MACRA) Director General Godfrey Itaye should desist from creating space for sacred cows in the course of exercising their legal mandate.

The Malawi Broadcasting Corporation (MBC) Director General Aubrey Sumbuleta a trained journalist himself be reminded that MBC belongs to the people of Malawi therefore the public broadcaster should strive to serve them at all time.