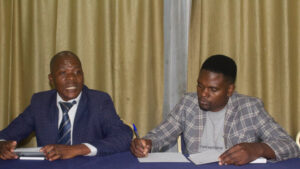 Remarks delivered by Mr. Sylvester Namiwa at a press conference in Lilongwe, today March, 6, 2020. He was accompanied by Mr. Brian Khembo.

It is only 75 days before Malawians exercise their right to vote in the May 19, 2020 fresh Presidential Elections.

The Centre for Democracy and Economic Development Initiatives (CDEDI) however, is seriously concerned with the snail’s pace at which progress is being registered, in-spite of the fact that we are only days away from the presidential polls. This slow progress can only be attributed primarily to President Peter Mutharika’s hide and seek kind of conduct in handling serious matters of national interest.

For starters the constitutional court gave 150 days within which fresh elections were to be conducted. This in a layman’s understanding meant Mutharika’s mandate expires within the next 118 days or less. The court gave the National Assembly 21 days to pass bills that will see the smooth implementation of the 50+1 law in determining the winner in the presidential elections.

Speaker of the National Assembly Catherine Gotani Hara and indeed the entire House did their part in ensuring that the bills were passed within the set time frame.

However, CDEDI has noted with concern that Mutharika seems not to appreciate the fact that Malawians are waiting with baited breath for him to assent to the two bills in order to allow for the preparations of the polls to start in earnest.

Apart from assenting to bills which will in turn pave the way for the appointment of new commissioners for the Malawi Electoral Commission (MEC), Malawians are also anxiously waiting for the president to act on the Public Appointments Committee (PAC) of Parliament’s recommendations to fire the current commission.

CDEDI is particularly shocked to discover that ever since the court ruling Mutharika has smartly buried his head in the sand and dogged on the national interest part of the ruling while throwing all his weight behind partisan politics by only concentrating on building his Democratic Progressive Party (DPP).

This is a complete departure from what the Malawi leader has been preaching since July 2015. Mutharika has been preaching three pillars of Patriotism, Integrity and Hardwork. By deliberately dilly dallying to assent to the bills Mutharika is telling his people that he is not patriotic. By failing to act on the PAC recommendations his integrity is put to serious questioning and by sitting on the two bills he is simply raising eyebrows on whether he is hardworking or not?

CDEDI just like any other peace-loving institution and individuals expected Mutharika to rise above his partisan politics and preach peace, unity and tolerance while coming to terms with the harsh realities on the ground. This according to CDEDI could have projected a real statesman in our beloved leader and his actions could have inspired many especially young people who look up to him as a role model.

The President’s failure to speak to Malawians since the court ruling has turned the country into a hopeless society that does not inspire confidence. The prolonged political tension has turned Malawi into some unfavorable ground for trade and investment. Businesses are at the moment folding up, thereby rendering more and more people jobless. Life is becoming very hard for the majority poor Malawians.

We at CDEDI believe this is tantamount to constructive resignation from the office of the presidency since Malawi cannot afford this kind of luxury when the economy is at the verge of collapsing. Act now Mr. President, or pave the way for others to do the job!

CDEDI is also disturbed with video and audio clips that have gone viral on social media purportedly touting the alliance between DPP and United Democratic Front (UDF) where some overzealous supporters are on record saying Mangochi is a no-go zone for other political parties.

We find such incidents as retrogressive and unacceptable in this modern-day multiparty dispensation. CDEDI therefore demands leaders of the two political parties to immediately condemn such conduct and bring the culprits to book.

CDEDI is reliably informed that State House has received visitors that have business to transact in the country, but as citizens we are waiting for the authorities to tell the nation the kind of business these people have come to conduct. How would this in turn impact on poor people that are currently surviving on pumpkin leaves at Kamoto village in Thyolo district? They flew in the country through a private jet, who is footing the bills? Is it President Mutharika, DPP, or Taxpayers money?

After all is said and done CDEDI’s position is that these are unwelcome visitors since we believe they are acting suspiciously, unless the State House comes out in the open to explain to the nation the reasons for the visitors’ presence in the country.

Finally, we continue to appeal to the DPP and its supporters to accept the Supreme Court’s verdict on MEC’s and President Mutharika’s appeal case, when the court sits on 11th March 2020. Let peace prevail in the country, and that we should channel our energy towards preparations for the fresh presidential elections which we as CDEDI, believe will be free, fair, transparent and peaceful.