Outcome of Meeting with IG 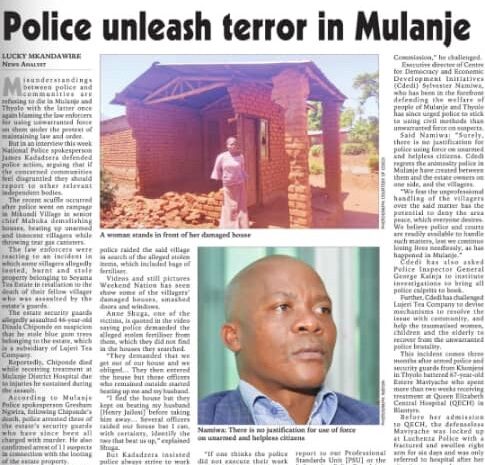 BRIEF OUTCOME OF THE AUDIENCE BETWEEN CDEDI AND THE OFFICE OF DR. GEORGE KAINJA, THE INSPECTOR GENERAL (IG) OF THE MALAWI POLICE SERVICE (MPS)

Center for Democracy and Economic Development Initiatives (CDEDI) had an audience with the Inspector General of Malawi Police, Dr. George Kainja, on Friday, 1st October, 2021, in order to seek answers on several questions the Malawi citizens have been asking, in relation to the conduct of the police.

The meeting lasted about two hours. Dr. Kainja was flanked by the Deputy Inspector General (DIG) Operations Demister Chigwenembe and six other senior officers from the Criminal Investigation Department; the Department of Operations; and the Legal Affairs Department.

Right at the onset, CDEDI would like to commend the IG, for accepting our call for the meeting.

He acknowledged we had brought forward pertinent issues.

The following in italics are the key points that were captured from the meeting against what was presented:

While describing the developments in Thyolo and Mulanje as unfortunate, the IG has pledged to launch investigations on the following issues which CDEDI had highlighted:

o The Estate owners in the tea growing districts of Thyolo and Mulanje are paying the police to skin alive the landless people, that are seeking for justice to be served after their land was violently grabbed at gun point by the white settlers from Britain;

o June 2021: The police in Mulanje arrested a minor and kept him in custody for three days, accusing him of stealing sugar cane from the estate;

o June 2021: The police descended on a 64-year-old Estele Maviyaje, beat her up, and broke her arm. As if this was not enough, they kept her in a police cell for three days, while being fully aware that her condition required medical attention;

o The dubious arrest of a former Member of Parliament (MP), from Kasungu district, Alex Major, following his accusations that some State House officials and Cabinet Ministers had pocketed MK50 million (about US$65, 000), from Malawian business persons of Asian origin;

The police and primary school learners

Dr. Kainja has conceded that it was very bad for the police to throw teargas canisters at Primary school learners. He has since apologized on behalf of the concerned officers. He pledged to investigate and bring the culprits to book.

o September, 2021: The police shamelessly threw teargas canisters at primary school learners at Luchenza primary school, who were protesting the arrest of one of their teachers suspected of violating Covid-19 preventive measures;

Use of excessive force and torture

The IG tried to defend the recent incidents involving the arrest of the truck drivers, who were on strike, arguing that the police is allowed by law to use force, claiming that the drivers turned violent and accused them of blocking the M1 road, and resorted to beating up fellow truck drivers who were not taking part in the industrial action. However, we failed to agree on what constitutes force.

o September 28, 2021: The police arrested and tortured non-violent and unarmed truck drivers, who were exercising their constitutional right by withdrawing their labour, in order to have their grievances heard by the authorities, as well as their employers;

Preferential treatment of suspects and cases

Dr. Kainja was very elusive on this issue,by indicating that Pastor Martin Thom, who was arrested recently, was detained for 6 hours, and claiming that the suspect is in India for medical treatment. However, CDEDI has demanded the IG’s office to respond to our earlier request for the suspect’s bail conditions to be made public.

Dr. Kainja, however, has pledged to launch investigations into the rest of the issues CDEDI had outlined as follows:

o Malawians now have more questions than answers over the way the Malawi police handled the arrest of Pastor Martin Thom, the former Special Assistant to the State President Dr. Lazarus Chakwera. The police moved with speed and unparalleled efficiency, that within an hour, Pastor Thom was arrested, cautioned, and released on bail. The following day, Pastor Thom was reported to have travelled outside Malawi, where he is enjoying life normally;

o There have been no investigations yet by the Malawi government, following the mysterious death of a motorbike taxi operator in the capital, Lilongwe, in 2020;

o A suspect being kept in a police cell with a handcuff on;

o No compensation yet for the family of the late Inspector Imedi, who died while in the line of duty;

o The Mathabi police in Mulanje district, are dragging their feet to investigate the death of Dinala Chiponde, who is suspected to have been beaten to death by Seyama Tea Estate security guards for suspected of stealing blue gum trees;

Entrenched nepotism in the MPS under the IG’s watch

While acknowledging that currently only 2 people out of the 13 in the Police High Command are from the southern region districts, Dr. Kainja observed that it is not his office that makes such decisions, but rather the Police Services Commission (PSC). He insisted that the commission promotes officers on merit.

The IG further argued that the High Command is supposed to present the society. He said he is not responsible for the promotion of the senior police officers. Dr. Kainja has since denied that he is favouring police officers from the Central and Northern regions.

o Before you were even confirmed as IG by Parliament, you transferred all the senior officers, whose districts of origin are from the Southern region of Malawi, and posted them to areas not befitting their ranks, without following the proper procedures for transferring such senior officers;

o Currently, there is none from the southern region districts, who is a Commissioner of Police in all the six regions, including the South East in Luchenza, where it was expected that you would deploy someone from the same area, who at least understands the social and cultural issues in that region;

o There is none in the Police High Command or head of a department from the southern region districts, despite having some officers from the south, with what it takes to be in such positions;

Abuse and ill-treatment of police officers

Dr. Kainja has admitted that the police will have to continue providing security to the President, every time he is travelling by road in Malawi, contrary to Dr. Lazarus Chakwera’s campaign promise, where he indicated that he would not allow this tradition to continue, once he was elected as the country’s President. The IG claimed that an attempt was made to withdraw such security during the former President Dr. Joyce Banda’s regime, with the assistance of the British government, where the police were trained to provide security to the President, without necessarily lining up on the streets. However, the IG claimed that such a system cannot work in Malawi.

Dr. Kainja has also defended the recent interdiction of some police officers, accusing them of leaving their posts for beer drinking, adding that the police follow a disciplinary code of conduct. The IG also indicated that looking at the gravity of the offence, he has powers to effect interdiction, adding that the police is very strict on beer drinking while in uniform, abuse of powers, and the use of excessive force.

Apart from cases of uncaged animals, mentally disturbed people, and what he termed as the nature of our roads and the civility of the road users to give way to presidential motorcade, Dr. Kainja said currently, Malawi faces terrorist scare, especially with what is happening in Mozambique. The IG also explained that the police are provided with the necessary requirements when they are proving security to the President on the streets, such as food rations.

o Prior to the court sanctioned June 23, 2020 polls, Dr. Chakwera promised that the police would no longer stand for hours on the streets, waiting for the President to pass. The State House is now changing tune, claiming that it is the IG’s office that is still clinging to that tradition. Why is the IG’s office clinging to this tradition when Dr. Chakwera already abolished it?

o Violation of principles of natural justice, where police officers are being interdicted without being given an opportunity to be heard;

o Police officers being made publicly to carry speakers for a Public Address system, to enable President Chakwera to address a crowd of people at a political rally;

o Police officers being made to stand on the streets, providing security to the President for hours, without any food or water;

The MPS relationship with the Rwanda police

Dr. Kainja claimed that Rwanda is an area of excellence in fighting terrorism, adding that it is not only Malawi police service that is interested in that area, but also other countries such as South Africa and Kenya. He nonetheless said that they are cautious about Rwanda’s human rights record, and that there is no need for Malawians and the Rwandan nationals to panic.

o Malawians were shocked to hear from the visiting Rwandan Police chief Dan Manyuza, that Rwanda intends to train the MPS. There are fears that since Rwanda is not anywhere nearer to a model where other countries such as Malawi can learn anything from, due to its bad human rights record, one tends to wonder as to why Malawi has accepted to sign a bilateral agreement with such a country. What are we really going to learn from Rwanda, when their police is used even to hunt and rain terror on its citizens that are currently in the diaspora?

Dr. Kainja claimed that his office already apologized to Malawians, due to the suffering they endured when the police were enforcing the Covid-19 preventive measures. He has since extended the same apology through CDEDI.

These are the issues that were discussed during the meeting:

o Malawians have seen for themselves their own police administering corporal punishment to those suspected to have violated Covid-19 preventive measures;

o Hundreds of thousands of Malawians have been arrested for not putting on a face mask, and have been holed up in filthy and congested police cells, where there are no face masks either!

The IG has pledged to protect media freedom, and to ensure that the media practitioners operate freely, within the confines of the law. This as after CDEDI highlighted the following to the IG:

o Journalists being threatened, harassed, and beaten by some heavy handed and overzealous police officers. Some of the journalists include Watipaso Mzungu of Nyasatimes online publication; Enock Balakasi of Joy Radio; Oliver Malibisa of Likoma Community Radio; Henry Mhango, a correspondent for The Telegraph (United Kingdom), and the BBC Africa Eye;

The meeting ended with a pledge from Dr. Kainja, for continued engagement between CDEDI and the IG’s office, for the improvement of service delivery by the Malawi Police Service.