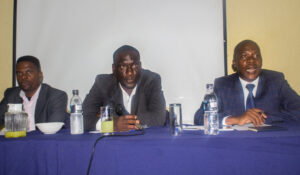 Centre for Democracy and Economic Dev elopment Initiatives (CDEDI) has learnt with regret sentiments contained in the Press Statement Minister of Information Honorable Mark Botomani issued dated December 25, 2019 under the headline CALL FOR PEACE UNITY AND TOLERANCE TOWARDS, DURING AND AFTER PRESIDENTIAL ELECTIONS CASE RULING.

The above headline prompted CDEDI to read it with keen interest since it touches on issues bordering on peace and national unity which we are interested in, only to discover that the statement is full of propaganda aimed fueling tension among people belonging to a different camp.

Going through the statement, CDEDI observed that while condemning Malawi Congress Party (MCP), Botomani conveniently forgot to condemn his Democratic Progressive Party (DPP) President Prof. Arthur Peter Mutharika for the remarks he made in Mulanje during the official launch of the National Tree Planting Season.

In his own words Mutharika said he is the legitimate winner of the disputed presidential polls, we find such pronouncements as an attempt to defeat the notion that the case can fall either way. This was a perfect example of irresponsible and careless sentiment not befitting a leader in a modern day Malawi.

While cautioning the minister to avoid practicing selective justice, CDEDI would like to also ask the minister to fulfill one of his constitutional roles of advising the president to be careful in his public pronouncements now that we are waiting for the ruling on the May, 21,2019 Presidential Elections case judgment.

It is the expectation of all peace loving Malawians that Mutharika must take a lead in fostering peace and national unity rather than making deliberate careless remarks which are now being shielded by his government spokesperson.

Unless Hon. Botomani publicly condemns his boss, he does not have a high moral ground to condemn anyone. CDEDI therefore demands that Hon. Minister should withdraw the statement and apologize to peace loving Malawians.

CDEDI is a newly established non partisan, nongovernmental organization that was established to with a goal to have a well-informed and organized citizenry that can ably demand their social and economic rights at the same time hold duty bearers accountable for their actions.

We wish all peace loving Malawians a Merry Christmas and a Prosperous New year!