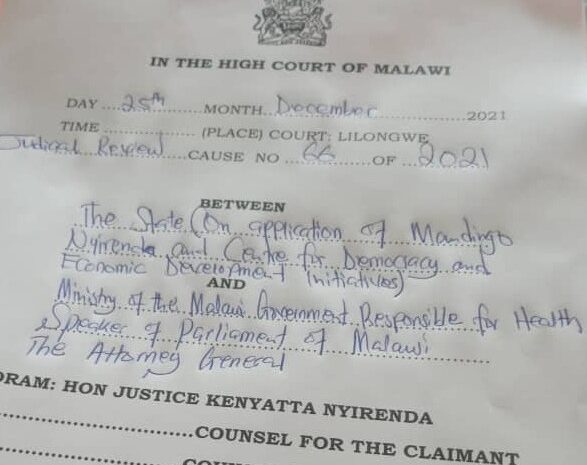 The Centre for Democracy and Economic Development Initiatives (CDEDI), is informing all concerned Malawians and the general public that it has sought the court's intervention over government's implementation of the mandatory Covid-19 vaccination campaign.

The High Court in Lilongwe, therefore, has set January 3, 2022 as the date for an interparte hearing on an injunction sought by the CDEDI, stopping the Ministry of Health from implementing the mandatory administration of the Covid-19 vaccine; stopping Parliament from demanding Covid-19 certificates from employees in order to access parliament premises; and also stopping all private and public institutions from demanding vaccination certificates from their employees and customers to have access into their premises.

CDEDI is the second applicant on the matter, while a concerned citizen, Mr. Mundango Nyirenda, is the first applicant. Through lead counsel Oscar Taulo, CDEDI is also applying for a judicial review for the court to decide whether the issues raised above are constitutional or not.

Meanwhile, the matter is before Judge Kenyata Nyirenda.

CDEDI has zeroed in on the matter, following Minister of Health Khumbize Kandodo-Chiponda's announcement that all public servants will be forced to take a jab come January, 2022, on one hand while parliament has been sending back those that failed to show proof of vaccination to enter its premises. This has caused public outcry and unnecessary panic among members of the public, hence the decision to move the courts on the matter.