1.CDEDI made its first public appearance through a press briefing that was held on December 13, 2019 at Bridgeview Hotel in Lilongwe after an analysis of the political situation on the ground then. This was the time Malawi experienced unprecedented political impasse ever since her independence in 1964, which emanated from the disputed May 21, 2019 Presidential Elections. The matter was in the hands of the Constitutional Court (CornCourt) sitting in

CDEDI made its position clear that Malawi was facing a political problem which required a political solution. An appeal was made to leaders of the three major political parties namely; Malawi Congress Party (MCP) President Dr. Lazarus Chakwera, UTM President Dr. Saulosi Chilima and Democratic Progressive Party (DPP) President Prof. Arthur Peter Mutharika to humble themselves and rise above petty partisan interests to resolve their differences for the sake of peace and national unity.

CDEDI asked the three leaders to unite Malawians by addressing a National Unity Mass Rally (NUMR) with one voice of peace, unity and tolerance despite their different political ideologies.

2.CDEDI launched a campaign known as ‘Accept and Move on Malawi” during a press briefing that was held at the same Bridgeview Hotel on December 23,2019. This time, CDEDI’s message centered on peace building and reconciliation since it was during the festive season. The institution urged Dr. Chakwera, Dr. Chilima and Prof. Mutharika whom CDEDI believed held the key to the direction of the country after the Concourt ruling, to bury their hatchets and extend seasonal greetings to one another as a sign of forgiveness and

Furthermore, CDEDI wrote personalized letters to the three political leaders regarding its position on the political situation in the country then. 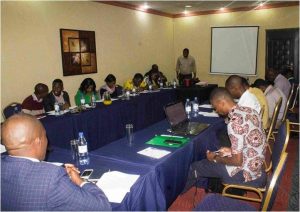 3.CDEDI had an interface meeting with the Lilongwe Urban Vendors Association (LUVA) at Livimbo Primary School. The vendors welcomed the organization in general and particularly threw their weight behind the National Unity Mass Rally and they pledged their support towards the ‘Accept and move on Malawi’ Campaign. They committed to go out as ambassadors of peace! 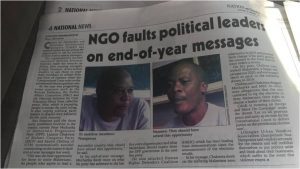 The leadership and some volunteers took to the streets of Lilongwe to interact with Malawians of all walks of life.

Although CDEDI is yet to access donor funding, it has successfully managed to run a mass media campaign of the Accept and move on Malawi.