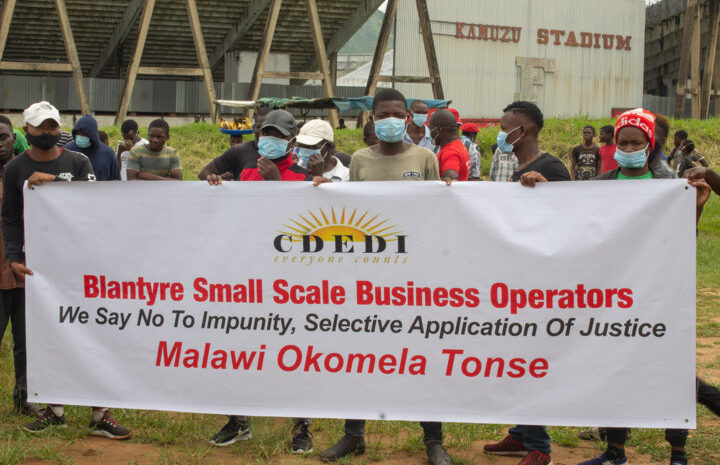 STICK TO THE CAMPAIGN PROMISES; CUSHION THE POOR AMID COVID 19 OR STEP DOWN!

The Centre for Democracy and Economic Development Initiatives (CDEDI); in collaboration with the Blantyre Small Scale Business Operators (BSSBO); the Minibus Drivers and Conductors Association; and the Kabanza Operators hereby present to you the Blantyre Chief Executive Officer (CEO) this petition which you are expected to formally present to the State President Dr. Lazarus Chakwera.

You may wish to be informed that we have arrived at this position after being ignored by the President and his Tonse Alliance government whom we gave a 14 days ultimatum on November 23, 2020, on several issues we have highlighted below. Dr. Chakwera, however, has left the issues unattended to, until the deadline for the ultimatum expired. There has not been any response from the Office of the President and Cabinet (OPC), and neither has there been any word from the State House. This is a clear case of impunity and executive arrogance which has no space in a modern-day democratic Malawi. It is against this background that CDEDI and the BSSBO are presenting their grievances in a form of a petition as follows:

1.    The President’s untrustworthiness and indecisiveness clearly manifested in his willy-nilly change of tune on the Tonse Alliance manifesto on the pretext of the Covid-19 pandemic.
2.    The introduction of stringent Covid-19 preventative measures that are heavily impacting on the poor and the marginalized due to lack of cushioning measures for the same.
3.    The influx of illegal immigrants from China, Nigeria, India, Lebanon, Pakistan, Rwanda, Burundi, and Somalia who are illegally conducting businesses in the country and have taken up the last available economic opportunities for the locals;
4.    The unjustifiable sharp increase of fuel prices in total disregard to the impact of Covid-19 measures that had already hit hard the poor people in Malawi;
5.    President Chakwera’s refusal to withdraw and apologise to the nation for using the word ‘NYANSI’ in reference to people his government is arresting, firing or suspending from the public service;
6.    The shambolic Affordable Input Program (AIP) which is taking away the dignity of the poor people, especially women who are sleeping at the selling depots and are being exposed to all sorts of sexual abuses;
7.    The failure by the Tonse Alliance government to address acute shortages of food across the country, which have hit hard the poor and the marginalized people;
8.    Government’s selective application of justice by arresting people from one region and tribe, while sparing corrupt public officials from the Tonse Alliance partners, such as a Cabinet Minister, his advisor and other alliance partners involved in the National Oil Company of Malawi (NOCMA) fuel supply scandal;
9.    Failure by President Chakwera to update Malawians on the Hotel bills saga at Crossroads involving his Chief of Staff and the Director of Finance at the State House;
10.    President Chakwera’s failure to honour his promise to produce an expenditure report on the Independence Celebrations that were cancelled at the eleventh hour;
11.    The inhumane enforcement of tax and other regulations on Motorbike Kabanza operators;
12.    The doubling of MPs’ and Ward Councilors’ perks when the rest of the civil servants have been given an average 10 percent hike;
13.    Total disregard of the rule of law by Dr. Chakwera and the Secretary to the President and Cabinet, for acting contrary to the Attorney General’s legal opinion to give Malawi Electoral Commission (MEC) Commissioners Jean Mathanga and Linda Kunje their appointment letters, and by accepting the firing of public officers with legal contracts;
14.    Ignoring the voices of the landless people in Thyolo and Mulanje districts, whose land was grabbed by the white settlers from Britain;

That said, CDEDI and the Blantyre Small Scale Business Operators, the Minibus Drivers and Conductors Association, and the Kabanza Operators would like to remind President Chakwera that political powers accorded to him under section 12 of the Republican Constitution derive from the people of Malawi, and the one exercising such powers does so on sustained trust. It is, therefore, our expectation that the President will act on these issues in earnest.

Lastly, but not the least, the demonstrations in Blantyre mark the beginning of a series of national wide protests that will spill over to the cities of Zomba and Mzuzu before going into the districts until such a time when the current administration is seen to be working on the grievances that have been raised in the petition. Just to echo Monsignor Boniface Tamami’s recent sermon, where there is no justice there is no peace. President Chakwera, therefore, should not expect peace unless justice prevails in the country. If the kitchen is too hot for you, Your Excellency, then kindly step aside and let the ship be steered to safe waters by a decisive leadership.