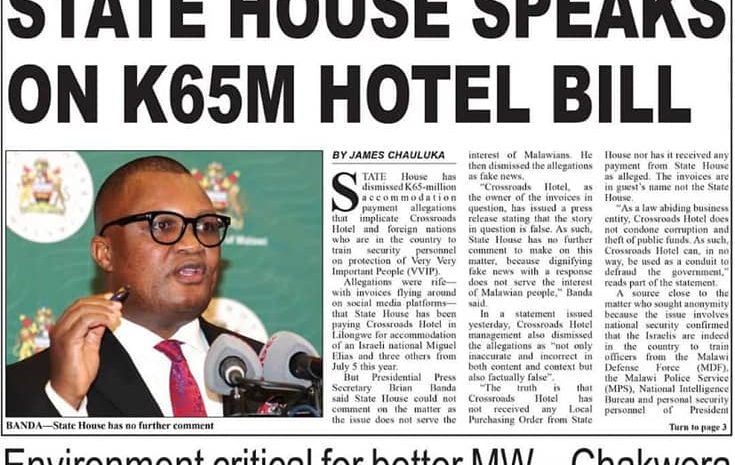 The Centre for Democracy and Economic Development Initiatives (CDEDI) is appealing to President Dr. Lazarus Chakwera to exonerate himself on his pledge to fight against corruption at all levels by suspending State House officers that have been implicated in the Crossroads Hotel Bills saga in Lilongwe, to pave the way for thorough investigations on these fraud allegations.
To begin with, President Chakwera should know that Malawians are dismayed with conflicting reports and inconsistent information and statements surrounding the State House and Crossroads Hotel over guests purportedly in the country on security matters.
CDEDI and indeed all well-meaning Malawians nearly dismissed what started as only social media gossip, up until such a time when the Crossroads Hotel management changed tune to confirm receipt of a Cheque worth MK12.5 million as proof of payment from State House. This change of tune contradicts an earlier statement issued by the hotel, denying receipt of any Local Purchase Order (LPO) from the State House.
The matter attracted even more public interest from the taxpayers when State House Press Officer Mr. Brian Banda was quoted in both The Daily Times and The Nation newspapers of Tuesday, October 20, 2020, where he told the former that “State House cannot comment on the matter as the issue does not serve the interests of Malawians since it is fake news,” and he told the latter that “State House cannot comment on the matter to avoid dignifying fake news.”
These twists and turns on the incident have prompted CDEDI to zero in on the saga, now that there are more questions from Malawians of good will than sensible answers. The inconsistent responses from Mr. Sameer Sacranie of Crossroads Hotel are enough proof that something very fishy has taken place between the State House and the hotel.
Mr. Sacranie should know that he is dealing with taxpayers’ money, and he should have treated the matter with utmost care, seriousness and in a very transparent and accountable manner.
Similarly, now that the management of Crossroads Hotel has confirmed receipt of payment from the State House, it was the expectation of CDEDI, and indeed all Malawians that the State House Press Office would issue a statement, apologizing to the nation for the deceitful and shameful statements that were issued earlier by Mr. Banda to the media. On the contrary, the silence from the State House is so deafening, giving an indication that the confirmation of payment by the State House to Crossroads Hotel was not fake news after all! Mr. Banda lied to Malawians!
What is particularly disturbing is the fact that all this is happening at a time when President Chakwera is busy ‘clearing the rubble’ in the country. The hotel bills saga, therefore, is a big litmus test for the Tonse Alliance led administration, especially on its efforts to crackdown on corruption and theft of public funds.
CDEDI is, therefore, demanding President Chakwera to suspend all the State House officers involved in the Crossroads Hotel bills saga, specifically his Chief of Staff Mr. Prince Kapondamganga and the Director of Finance Mr. Gideon Kumbalu, to pave the way for thorough investigations on the matter. Should Dr. Chakwera remain mum on this incident, Malawians will then construe that his stance on the fight against corruption in the country is just some political rhetoric, when in actual sense it is political persecution since his administration is only targeting those connected to the immediate past ruling party, the Democratic Progressive Party (DPP).
Lastly, but not the least, CDEDI is reminding Dr. Chakwera that time for flowery speeches is over, and that this is now time for action.
BACKGROUND
CDEDI is a non-partisan, nongovernmental organization that was established in a quest to attain a well-informed and organized citizenry that can ably demand their social and economic rights at the same time hold duty bearers accountable for their actions.
Among many others CDEDI aims at sensitizing the masses on matters of national importance, inculcate the spirit of a peaceful coexistence among people of different ethnic, political and religious affiliations; provide civic education on people’s rights and responsibilities in economic independence and contribution towards national development and lobbying for the electoral law reforms.
SYLVESTER NAMIWA
EXECUTIVE DIRECTOR